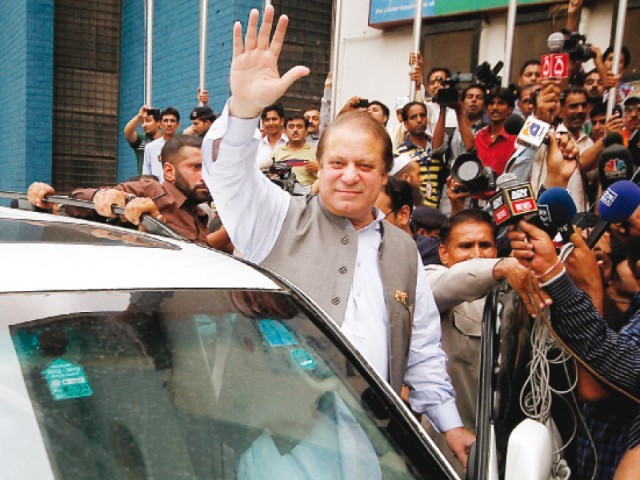 Sharif began his political career in the early 1980s, while serving as director of the Ittefaq Group of Industries. In 1981, Sharif was appointed finance minister of Punjab Province by the Zia government. He used his newfound political authority to promote his pro-business stance and presented four successive development-oriented budgets targeting the improvement of socio-economic conditions in rural areas. Sharif raised the appropriation of funds for the development of these rural areas to nearly 70 percent of the province's annual development program. Four years later, Sharif became the Punjab's chief minister in a general election. He now had a great deal of influence over the province's industrial and agricultural power.

When Zia was killed in a 1985 plane crash, Benazir Bhutto, daughter of former prime minister Zulfikar Ali Bhutto, assembled a coalition government. Sharif fiercely opposed this act. As a result, he became a leader of the newly formed Islami-Jahmoree-Itehad (IJI), a rightist coalition led by the Moslem League. He won both national and provincial assembly seats in 1988 general elections. Sharif eventually vacated the national assembly seat and returned to his role as chief minister of Punjab. A dispute with Bhutto over the distribution of government funds in Punjab vaulted him into the national spotlight.

Sharif's perseverance and political clout placed him in the vanguard of Bhutto adversaries. He proceeded to crush Bhutto's Pakistan People's Party (PPP) in the October 1988 election. Sharif was elected a Member of Parliament in the October 24, 1990 general elections, after leading a ten-party Islamic Democratic Alliance (IDA), an affiliation of liberal groups and rightist Islamic militants. On November 3, he was nominated by the IJI as its candidate for the premiership and was soon after sworn in as Pakistan's new prime minister. For three months prior to his victory Pakistan's top generals, bureaucrats and business leaders had been systematically stripping Bhutto's PPP of nearly all political power.

Pakistan's transition to democracy was a difficult undertaking, but Sharif's election proved a turning point. After having endured a long history of military dictatorship, Pakistan had elected a politician without roots among the country's traditional power brokers, the landed aristocracy. Sharif's election marked a major shift in Pakistan's geopolitical balance of power toward a new generation of entrepreneurial elites.

Most of Sharif's reforms were aimed at deregulating and liberalizing the economy. He quickly dismantled the socialist-style economy by selling off inefficient and bankrupt state enterprises, opening the stock market to foreign capital, and loosening foreign exchange restrictions. He took criticism for bold initiatives, such as providing unemployed youths easy installment loans to run duty-free imported taxis. Sharif also launched legislation that would make the Islamic code the supreme law of Pakistan. But it was his economic reforms, such as the lifting of control on foreign exchange and the start of privatization, that won accolades and support from the World Bank and the International Monetary Fund.

Sharif became the target of many of the traditional landed interests, including Bhutto, because his policies deeply affected Pakistan's political and economic power structure. But his ouster came with an attempt to weaken the power of President Ghulam Ishaq Khan. Sharif had long been considered compliant, willing to quietly take orders from the president, but the two had clashed over reports of corruption in Sharif's government. The president dismissed Sharif in April 1993, after months of political turmoil. Army troops surrounded the state-controlled radio and television stations shortly after dark. An hour later, the president dissolved parliament, accusing Sharif of corruption and mismanagement. Sharif's family business had allegedly grown in value by about 20 billion rupees during his 30-month term as prime minister. He was dismissed under Pakistan's controversial Eight Amendment, that gives the president the power to discharge an elected government. The corruption charges against Sharif were later proven to have been false, and the Supreme Court restored him. But he and Khan were eventually manipulated into resigning due to their continuing hostility toward each other.

Bhutto was elected prime minister once again and Sharif served as opposition leader during her rule. But on November 5, 1996, President Farooq Leghari removed Bhutto from office on charges of corruption. This gave Sharif the opportunity to regain power. He engineered his political resurgence by converting himself into a populist leader. An electorate tired of corruption, inflation, and unemployment found his simple, straightforward approach in the election campaign appealing. He claimed his Pakistan Muslim League (PML) government was intent on taking drastic action to restore the national economy, root out corruption, afford easy justice and job opportunities on merit, set healthy democratic traditions, and restore Pakistan's sullied reputation. "Pakistan needs now to project a new image in the world," Sharif told Reuters in a pre-election interview. "We have become a laughing stock where every time the president and prime minister are fighting one another. This must now come to an end."

On February 17, 1997, Sharif led the PML to a landslide victory (177-16), crushing Bhutto in the process. Sharif's Muslim League won a decisive parliamentary victory, winning 134 seats in the 217-seat parliament. Bhutto's PPP was second, winning 18 seats. The PML commanded around 165 seats when combined with its small-party allies, giving it a solid working majority. He stepped into office with the responsibility of reviving a crisis-laden economy. Domestically, Sharif was faced with boosting an economy plagued by budget deficits, 30 billion dollars of foreign debts, high inflation, and a nation with very high expectations for relief and a clean administration. On foreign affairs, he faced tensions with India and festering dissension in Afghanistan.

After retaking Parliament's highest seat, Sharif intended to focus on removing the obstacles blocking the economic development of Pakistan, namely corruption. But his endeavors were brought to a standstill by terrorist acts committed during the first six months of 1997. These acts forced Sharif to reevaluate his agenda, and he began to concentrate on establishing law and order. One of his first acts was to dismiss members of his own government, including a chief minister who belonged to Sharif's PML party.

Sharif has spent a great deal of his administration embroiled in a nuclear arms race with India. Estimates have placed Pakistan's nuclear arsenal of uranium at 200 kilograms, enough for 15 to 25 bombs. Sharif made an effort to allay Western fears of further expansion of its stockpile and possible nuclear weapons trading in a U.S. News and World Reportarticle. "We have not and will not transfer sensitive technology to other states or entities," he was reported to have said. But it was feared that possible sanctions against the country would create an incentive. Pakistan was later condemned by the world for testing its nuclear weapons in an underground blast in June 1998.

Sharif has proven his ability to emerge as a strong leader. His first ousting marked the... Continue reading visit us at: https://arynews.tv/en/tag/nawaz-sharif/